Got his first pair of glasses today: 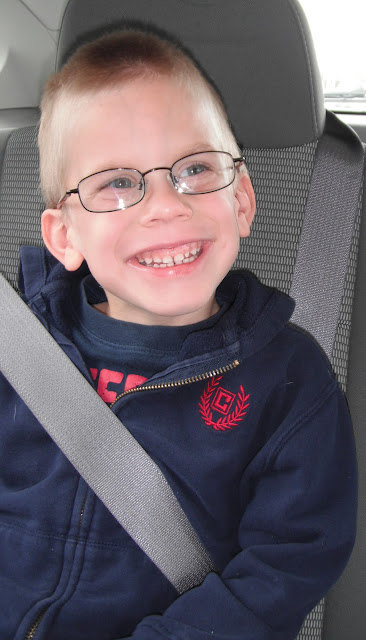 It was obvious that he can see a lot more clearly with them on. He kept pointing stuff out around him. I explained that he can not throw tantrums while wearing his glasses. We'll see how that goes. 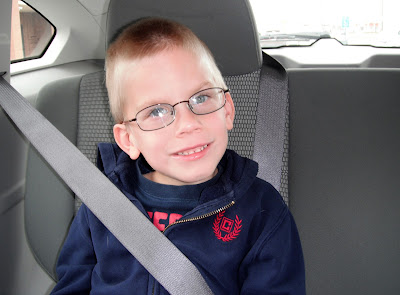 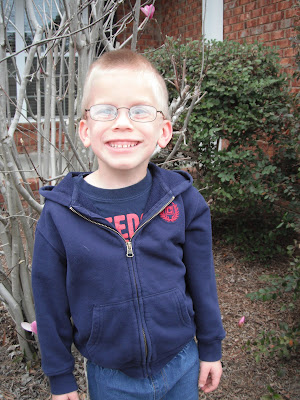 Other pictures that were on the camera:
One night an hour or so after I put Gavin to bed I heard him in the hallway. I asked him where he was going. "I going to work!" 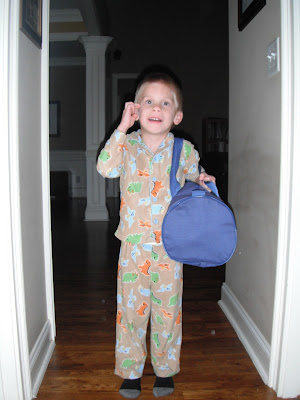 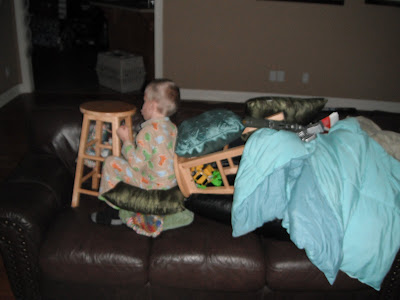 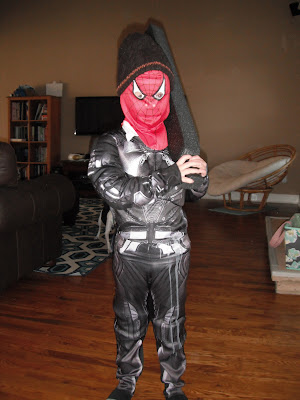 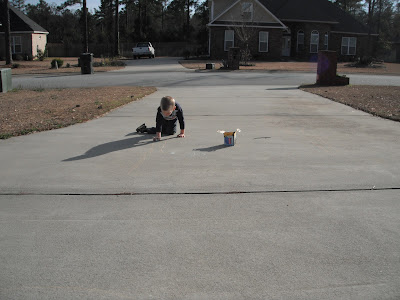 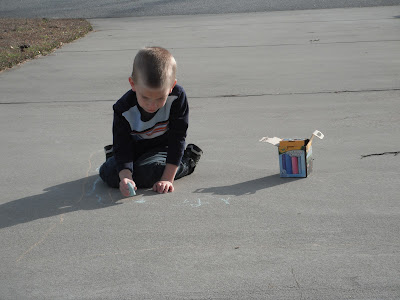 What do you do when the toy you buy from goodwill for $1 is missing a head? Lego head. This toy ended up being thrown away as punishment for lying about drawing on the wall. 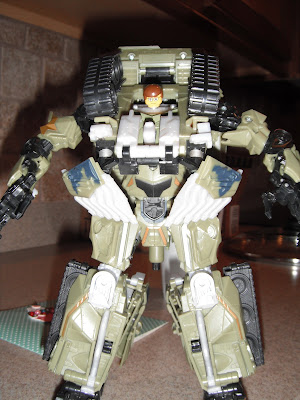 Gavin's punishment for drawing on the wall was to help me clean it (he wiped the residue off from the magic eraser) and to dust all the baseboards in the house except in the bedrooms. He looks real bummed by his punishment: 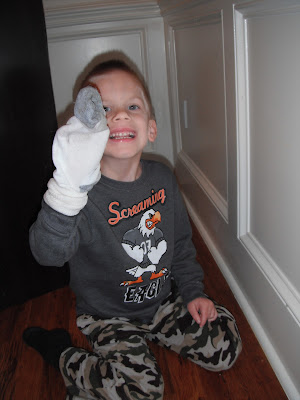 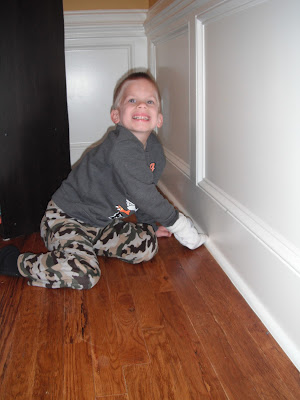 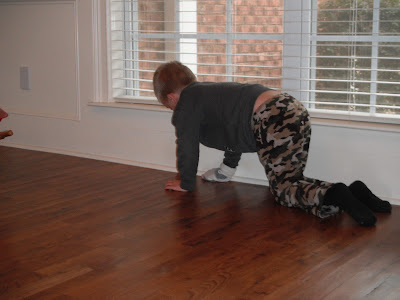 the wall after cleaning - will still need to be painted 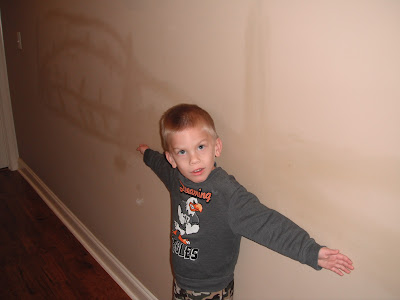 The rest of the story

So Jake and I quickly accepted the fact that I will be homeschooling next year. The more I thought about it, the more I knew it would be the right decision for us. In fact, the more I think about homeschooling, and the more I learn about it, the more trouble I'm having coming up with good reasons to ever put Gavin in public school. In today's day and age there is so much information available online. And homeschooling is becoming more and more popular, with a strong network of homeschooling families in our town - even a few families we know from church homeschool. I just think about all the wasted time in public school, and how that time could better be utilized at home. I'm not saying I'll always homeschool Gavin, I really don't know. But it is an option now, more so than before. In the past whenever the topic of homeschooling has come up with friends I have always said it is not my first choice but that I would homeschool if there was a need, some reason public school wasn't working. Now I'm kind of thinking the opposite - I will send him to school when there is a need we can't fulfil at home. Maybe. Who know, he may drive me nuts next year and I may be ready to push him out the door as soon as possible. We'll take it one day at a time. So, as all these thoughts have been going through my head, I realized that Gavin has a need that his current school is not fulfilling this year. More and more often he is coming home with worksheets not completed, with a note attached saying he refused to do his work. And the work he is doing is getting sloppier and sloppier. The final straw was when I noticed he has started to spell his name incorrectly (after spelling it correctly this whole school year.) Something was wrong. His teacher told me he can do excellent work some days, but others refuses. And some days he will only do his work with her next to him coaching him on. I didn't really send Gavin to school this year to learn a lot academically. I believe preschool should be more about learning through play. But since worksheets are part of the curriculum at his school, I don't want to reinforce his poor performance by allowing it to continue. I'm not exactly sure why Gavin isn't doing his work consistantly well at school, I have a few theories. It could be just that he hates doing worksheets. I don't balme him there, they are boring and it's asking a lot of a little kid to do them. He could be overstimulated, unable to concentrate. He could be so engrossed in socialization he doesn't want to do his work. Some of it could be too hard. Gavin sometimes gets really upset when something is too hard. At home this leads to tantrums, maybe at school he just stops trying. I have a feeling its a combination of these factors, and probably some I haven't even thought of yet. But I can help him at home with all these things. I can work with him one on one, provide more fun ways to learn, and address any deficits. As an occupational therapy assistant I'm trained to be able to adapt materials as needed, and I know how to address deficits and encourage growth in many areas including visual integration and fine motor skills. So we decided to go ahead and pull Gavin out of school. Last Thursday was his last day. And I am excited about teaching him. I really look forward to it. So far our homeschool has consisted of story reading, playing educational games on the computer together (there are tons online for free!), and playing with friends today at Monkey Joe's. We've also started on a phonics learn to read program that I'm excited about. So far so good!

*A story to remember*
When I told Gavin's teacher I was going to pull him out of school the other pre-k teacher was there. She had taught both classes the day before. She said as the kids were doing their work she did not have time to sit by Gavin and help him spell his name, as his teacher often did. So she wrote "Gavin" on a post it note and gave it to him so he could copy it. She showed me Gavin's paper - instead of writing his name he just stuck the post it note on it.

*One more thing*
As I wrote this post Gavin was pretty quiet. I asked him if he was playing legos in the other room and he said yes. He was not. He was drawing on the wall in the hall and a few other surfaces. He had both a black dry erase marker and a sharpie in his hand - from Jake's desk drawer (my fault, just last week or so we had decided not to let Gavin play in that room unsupervised). I think most of the marks were from the dry erase marker. Magic eraser, rubbing alcohol, nail polish remover. Removed the marks but smears all over the wall, it will need to be painted. Lying and destruction. Oh my.

Have you ever had a strong feeling that you were supposed to do something? Maybe a feeling that you should check and make sure someone is ok, or that you should avoid driving in a certain direction? As a member of The Church of Jesus Christ of Latter Day Saints I am privileged to the gift of the Holy Ghost, which allows me, if I am living a virtuous life, to receive continual guidance and inspiration. In other words, I get those guiding feelings fairly often. Usually it is through prayer. Sometimes it is not. Sometimes I'm not sure if I'm just having a random feeling or if it really is a spiritual prompting. Sometimes the feeling is so strong there is no mistaking its source. One of the leaders of my church said of the Holy Ghost, "He causes the truth to be indelibly written in our souls and can cause a mighty change to occur in our hearts." A couple weeks ago I got the paperwork to register Gavin for Kindergarten next year at his current school. The main reason we planned on leaving him there is that Kindergarten at his current school is 9-12 instead of 8:30-3:30 at public school. Jake and I both find it ridiculous to put such a young child in school all day, especially since I'm a stay at home mom. I had a slight feeling that I shouldn't submit the paperwork yet. I didn't think anything about it, and didn't fill out the forms. With sequestration looming I thought maybe it was related, although we planned on paying the tuition out of savings if need be. A few days later, one evening before bed, I got a really strong  prompting that I am supposed to homeschool Gavin next year. Shocked the hell out of me (You know if I cuss on the blog it must have been really shocking). My immediate thought was: I don't want to do this, but if God wants me to I will. What seems to be the theme song of our year popped into my mind - I will go, I will do, the things the Lord commands. I know the Lord provides a way, he wants me to obey. I called Jake before I went to bed, telling him about my prompting. As usual, he was supportive, saying that I should do what I felt is right. I couldn't sleep, which is a very rare occurrence for me. Luckily I have a night owl for a Mom. I called her and told her what I was thinking of doing. We talked it through and by the time I got off the phone both of us realized it was a pretty good idea, one that would help Gavin quite a bit. TO BE CONTINUED.... (Gavin is asleep and I want to enjoy some time to myself - and there's ice cream in the freezer.)

Since I didn't really explain this during the posts about our Seaworld vacation, I thought I would now. The main reason we were able to go on that vacation was that it was heavily discounted. This is how I did it:
Total saved = $495